Coffee Roasting at Home (and other embarrassments)

When I made my way to the kitchen this morning, I discovered what I already knew from yesterday.  I am out of my favorite French Roast coffee.  Very nearly out of my favorite "Cinnabon" creamer (so very bad for me, but so very delicious), too.  What to do, what to do?  I'm having such a difficult time with my first-of-the-month-and-no-more paychecks...I am constantly reminded of something my grandmother used to say: "There's too much month at the end of the money".  Yep.  Very true, Grandma.  No French Roast coffee beans until tomorrow.

I remembered the bag of generic almost-beige coffee beans I bought awhile ago...I like to pour the beans into a tall glass container, then insert a taller vanilla-scented candle; it smells heavenly while the candle is burning.  But I would never DREAM of actually grinding and brewing those almost-beige coffee beans; by the time I put in the creamer, I might as well just have a cup of hot sweetened milk.  However, who's to say that only a certified barista can roast beans?  I can probably roast beans.  It's worth a try, right?

So I found those almost-beige coffee beans, and poured some of them into a heavy baking pan: 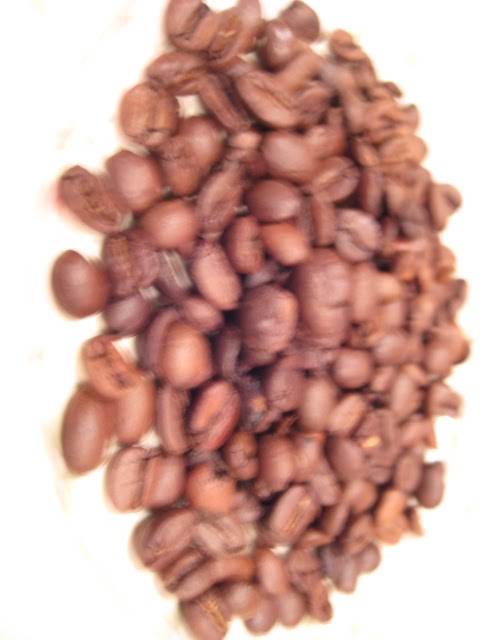 Yes, I know the picture is blurry.  This was pre-caffeine, remember?  (Or should I have had the camera on the macro setting?)  I set the oven for 350 degrees, and inserted the pan.  An hour later, I stirred the beans.  I saw progress, I really did.  Another hour later, I stirred the beans again.  More progress...but not enough.  Screw this, I said to myself...and I set the oven for 450 degrees.  Within 15 minutes, while stirring my significantly darker beans, one of the several fire alarms in my apartment began to scream, and a robotic voice announced that there was a "fire".  This process repeated itself every few seconds.  And apparently there is a notification system, since while I was fanning the air under the alarm, the office called to see if my apartment really was on fire.  That's nice, right?  Really, very comforting.
After stirring the coffee beans every 15 minutes, and having to deal with the same process with the fire alarm, I decided they were plenty dark, and removed them from the oven, which really did upset the fire alarm.  I had no idea that coffee beans would give off some sort of essence (there was no smoke) that is toxic to smoke/fire alarms.
However, here's the result of my experiment: 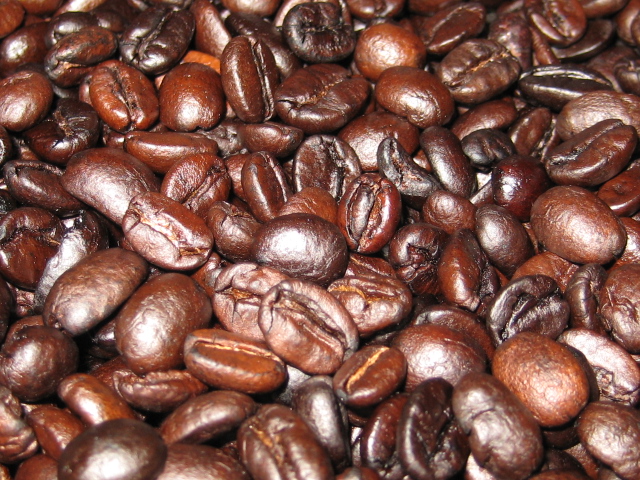 I could hardly wait for them to cool so I could grind them up and have my coffee!  And although I had to monkey around with milk and cinnamon and sugar to eke out the pitiful amount of Cinnabon creamer, I am very satisfied with my cup of coffee.  Even though it is after 3:00 p.m.  Better late than never.
﻿
Posted by Donetta at 3:13 PM