If you ever think maybe you should roast coffee beans at home...stop thinking.  Don't do it.
I figured that I'd successfully roasted my own beans. Maybe I am being too...well, I'll be honest, the apartment really stinks. I think the fire alarm reverted to a stink alarm, and that's why it kept going off. I wish I could say that it smells strongly of yummy coffee in here, but it doesn't. It smells strongly of stinky burning something...something terrible. I opened the patio door, and the window in the craft room, hoping for a cross-breeze that would clear out the stench. Didn't really work. I lit a lovely vanilla candle (ix-nay on sticking it in a container of coffee beans, just the vanilla candle on its own, good GOD no more coffee beans for awhile); hopeful that before bedtime my living quarters would smell sweetly of vanilla.  I have to say, it didn't work quite as planned.

But then I discovered (again what I already knew from before) that I was very VERY low on Cinnabon creamer. Tragedy. I tried to monkey with my latte, adding milk and cinnamon-sugar. Oh dear. My latte, which is really an important part of my day, was sub-par. The cinnamon does not dissolve like the sugar does. It stuck to my lips. I am very dissatisfied on all accounts.

And the poor cats.  Really, I think if I had birds, it would have killed them.  Here's Bella's reaction to the whole thing: 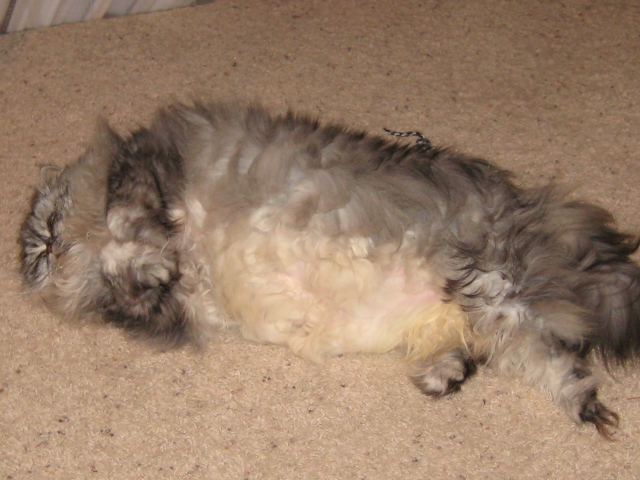 Well, actually that's Bella's reaction to just about everything.  But it still stinks in here.  I think I will leave the coffee roasting to the baristas.  Also, as a side note...did you know that coffee beans "pop" like popcorn?  Yes, they do.  Not all of them, and they don't morph into anything fluffy, but it's unnerving to hear that coming from the oven.  Yuck.﻿
Posted by Donetta at 6:42 PM