Memories and Thanks Blog Hop Reveal

As a "silent" follower of Lori Anderson's blog, Pretty Things, I lurked in the shadows for ages...personally blogless and deeply impressed by all the amazing pieces of jewelry created by Lori's friends and followers for the annual Bead Soup Blog Parties.  I wanted to be part of this group...oh, I wanted it so badly!  But the mechanics of creating a blog were, I thought, beyond me.

With some encouragement from friends, and some HANDS ON (!) help from Lori herself, I finally created a blog, strictly so I could join the bead soup parties and be part of this community of beaders and stringers and knotters.  And I have done just this...poorly, for the most part, as the mechanics still mostly elude me.  Photography and technology in general are not where I excel.  But one of my resolutions for the coming year is to embrace the process, read the manual that came with the camera, and get with the program.

This particular blog hop really spoke to me.  Memories and thanks...what a terrific idea!  I'm contributing to this blog hop in memory of my Grandma Ellen, who meant the world to me.  I loved her so much!  And you know what?  You would have loved her, too.

My grandma was the oldest of several children in a poor family in Indiana...she was born in 1898 (I know this, because when I was 10 she gave me a real silver dollar from that year so I'd never forget when she was born).  She worked in a bank until she married my grandfather at the advanced age of 28 (he was a young lad of only 22...quite a scandal!)  When her two children were mostly raised, the family moved to Sebastopol, California, where she began working as a bookkeeper in an apple cannery.  In fact, she worked as the cannery's bookkeeper full time until she was 76 years old, long after my grandpa died.  Every morning she would hook herself into the most amazing corset (swearing all the while...hating her large breasts and wishing they belonged to anyone but her), attach her support hose to the garters hanging from that corset, and put on her slip, blouse, and suit.  Then she would spray herself with Avon cologne, put on her makeup and do her hair, and finally she would visit her jewelry box and choose a brooch to wear, and matching clip-on earrings. Then she'd light a cigarette, drink a cup of percolated black coffee, and off she'd go.  In my mind, my grandma was the most exotic woman in the world.  She worked; she had a housekeeper; she bought cases of Coca Cola (in glass bottles) from the guy who stocked the vending machine at work, and kept cold Coke in her rounded vintage refrigerator just for her grandchildren!

Ah, those brooches!  My grandma was a short, stout woman...but she was drawn to Sarah Coventry brooches like a bee is drawn to nectar.  BIG brooches.  Big and glittery and showy.  I never knew what became of all the treasures in my grandma's jewelry box after she died; she lived a long time (until she was 96), and spent at least five years in a nursing home before she died.  When my father died two years ago, my sister found two of the brooches in Dad's handkerchief drawer.  She gave them both to me, thinking that I could use them in one of my creations.

You know, I never really found a use for them...until I read Lori's post about the "Memories and Thanks" blog hop.  I tried everything I could think of to make this particular brooch into something that was "mine"...I tried inserting beads and pearls into the chain.  I tried using a beautiful antiqued brass bail.  Ultimately, every single thing I added actually detracted from the finished piece.  And that's not the point of making jewelry, is it?  It's not supposed to be so busy that it hurts the eyes to look at it!  And believe me, this focal is busy enough...bright and shiny enough...just by itself.  So although I feel like I'm cheating by simply attaching a chain...it stands alone much better than with anything else hanging from it or attached to it. 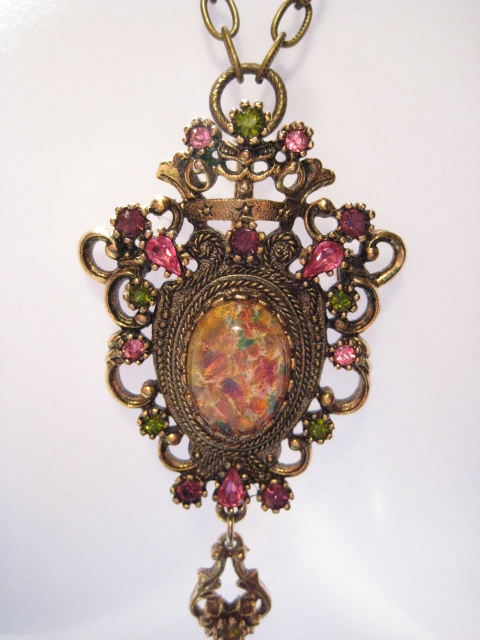 Can you see the absolute glitziness of the center focal?  It's like GLITTER CONFETTI!  Here's a picture of more of the whole piece, which in reality is just a chain attached to the brooch: 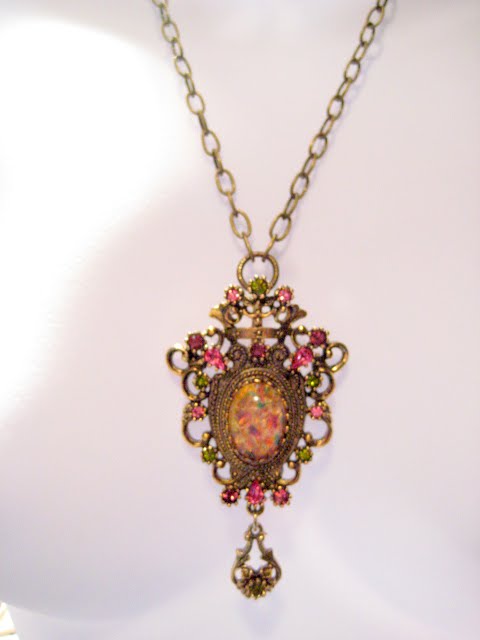 Oh, this makes me miss my grandma more than ever!  She was the most understanding person in my world.  When I visited, I slept in Grandma's double bed with her.  She would wrap her hair in toilet paper and pin it in place, put on a hairnet, and TAKE OUT HER TEETH!  But then morning would come, and she would transform herself into an elegant (in my eyes, anyway) career lady...an amazing thing to behold.
Please visit the other bloggers participating in this challenge:
﻿
Adlinah Kamsir Dream Struck Designs