Here in Portland, we have an odd relationship with snow.  We do get snow, but only occasionally.  And while the higher elevations receive quite a bit of snow (again, only occasionally), here in the city proper it is quite an event.  We begin receiving dire warnings from local news stations, advising us that it's coming, and showing all sorts of vehicular disasters from past snows.  (Some are very entertaining, actually, but only for those of us who were not in those vehicles at the time.)  And then sometimes we do get snow, which literally shuts down the city, and sometimes it just passes over the lower elevations.

Yesterday was a Fear of Snow day.  I bundled up in fleece and decided to sit cozily in my comfortable chair, add to my yo-yo stash, and watch marathon episodes of The Tudors.  Here's what was going on at my house: 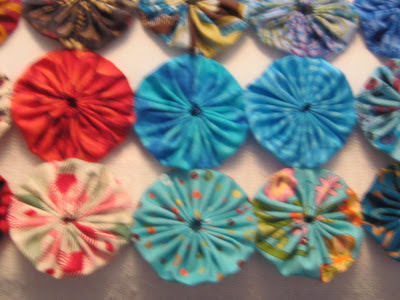 It's a terrible blurry picture, isn't it?  (I keep hoping that my skills will improve with each picture I take, but I'm beginning to think that I should read the instruction manual.)  I actually have quite a lot of this project joined together, with a king-size coverlet in mind.  A COLOR-BLOCKED coverlet...I saw a very small version on Flickr and was so impressed that I had to make one for my bed.  I've already completed two tablecloths, but something for a king-size bed is quite an undertaking.  Here is a picture that shows more of this project... 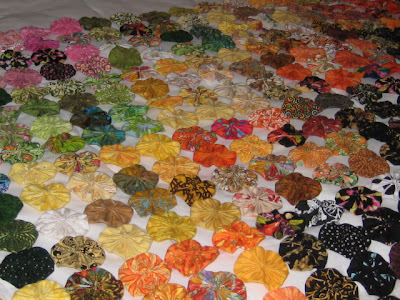 I had to plot out the color sequences before joining the yo-yos...each section contains a total of 12 in one color group, and I offset the groups by one as I added on below.  My first "row" (which is actually 4x4) starts with blue, then with purple, pink, green, yellow,orange...and just below, for the second "row", I started with purple, pink, green, and so on...it gives a diagonal stripe effect as the coverlet grows.
It is portable, soothing work that satisfies my need to multi-task while watching television.  For some reason, I feel lazy and unproductive if I actually sit down to watch with nothing in my hands.  In reality, it was always a real bone of contention for my family to watch television with me, since I was frequently saying "I missed that, will you please rewind?".

And by the way, I did see snowflakes for about 10 minutes...but nothing stuck, and all the fear of snow came to nothing (for me)...but I did get a lovely day out of it!
Posted by Donetta at 11:40 AM