This challenge was a long time in the making!  Hope from Znetshows initially contacted her designers in October, asking us to brainstorm and come up with some designs featuring the beautiful Znetshows cultured sea glass beads...but not for jewelry.  (This is a more difficult challenge than you can imagine!)  So my mind started to churn, and I came up with a couple of ideas...first, a jeweled topper for a gift-wrapped package (telling you now, this would have to be for a VSP...a Very Special Person!), and the other being a "vase bracelet".  Years ago, I received a gorgeous bouquet of roses in a dark purple matte glass vase...and around the neck of the vase were some pretty beads strung on wire.  I loved the flowers, but REALLY loved the vase bracelet...I still have it, in fact!

And then...well, things happened.  I had knee replacement surgery, which was much worse than I had expected, and then very shortly, much better than I had expected.  Does that make sense?  It will if you've ever have joint replacement surgery!  It's a brutal surgery...I can't really think of a better descriptive word.  They use construction tools in the operating room, which thankfully I was oblivious to.  And then that very same day, the nurses make you get out of bed and stand on that wounded leg.  Honestly?  For the first 8-10 days, I thought I would have been better off the way I was pre-surgery (in pain ALL THE TIME, but predictable pain...pain I was accustomed to).  And then, like magic really, it all turned around.  And let me tell you, I would do it again without hesitation...maybe with some cursing and crying, but knowing full well that the outcome is totally worth it.

All of which has nothing to do with a non-jewelry challenge, except that it put me (for longer than I'd expected) out of the disorganized, chaotic den of madness that I call my craft room.  I apologized to Hope, and she was (as usual) wonderful: no worries, thanks for letting me know, I am so sorry you're hurting, keep in touch.  Which...I kind of didn't do, at least not very well.  So when the most recent reminder email arrived from Hope, I felt all kinds of bad.  And I got to work.  I went with my original ideas, but changed things up slightly...I used less of the beads that I'd requested for this challenge, and more of the beads in my stash (from previous Znetshows challenges, and also...you know...some of the hundreds of thousands of beads I've collected over the years).

Here's the gift topper...which is indeed for a VSP! 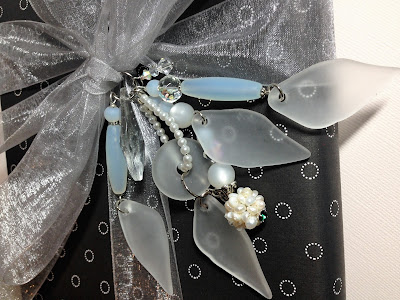 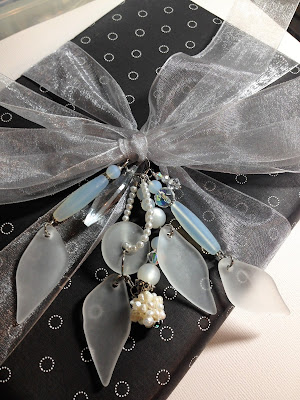 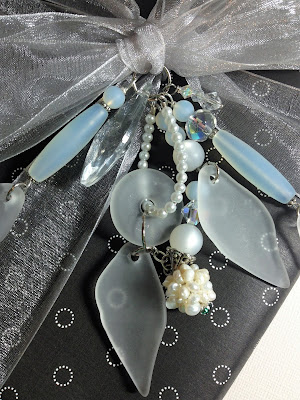 In addition to those aforementioned "stash beads", here's a list of the Znetshows cultured sea glass beads I used:

My next project was the "vase bracelet" (although maybe it's a "vase necklace", since it wraps around the neck of the vase, which BTW was purchased at Goodwill). 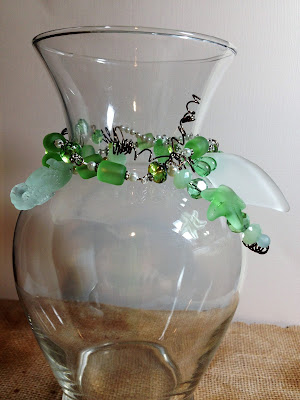 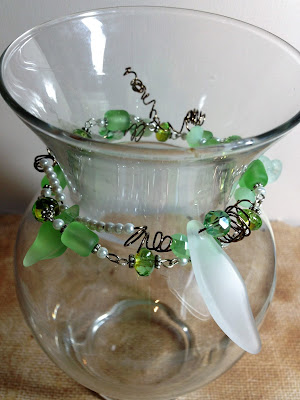 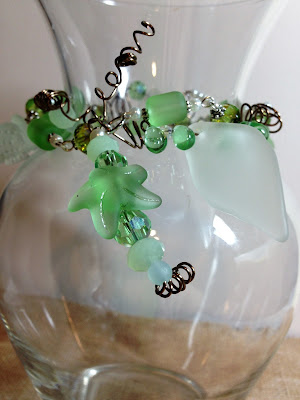 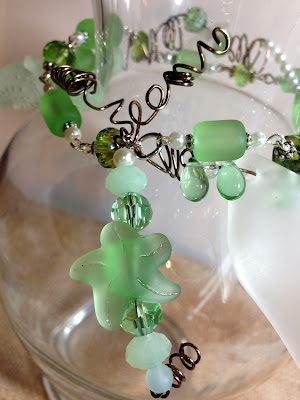 This was quite simply FUN to make.  I started out with a bracelet strand I'd taken off a 3-strand bracelet, and added links (eye pins are our friend!) until it fit around the neck of the vase.  Then I took about 3 yards of craft wire, added the beads for the dangle, and spiraled the end of the wire to prevent the beads from slipping off.  Then I added beads and twisted and spiraled the wire as I saw fit...totally freehand.  I slipped the wire through the links in a random way, ensuring that they won't separate from each other.  And at the end, I spiraled the end of the wire just as I'd done at the beginning.

I enjoyed these projects immensely, and can't wait until the next Znetshows challenge!